On this day, 91 years ago today, July 30, 1930, President Herbert Hoover officially authorized the immediate start of construction of Hoover Dam in Black canyon. A 35 miles jaunt outside of what was then, the little town of Las Vegas, Nevada.

President Hoover signed the Appropriation Bill (as part of the Boulder Canyon Project Act), and so Ray Lyman Wilbur, Secretary of the Interior, sent Order No. 436 to Dr Elwood Mead, Commissioner of Reclamation, which read: “You are directed to commence construction on Boulder Dam today.”

From what I have seen in the history books (and I’ve read a lot of them), that’s pretty much how it happened in sequence on this day.  Signed, sealed, and then immediately delivered!

People and a Place to Call Home

Six Companies Incorporated, the official contractor for the project could now officially start building what is acknowledged as one of the greatest mechanical wonders on earth. Even the experts of the day didn’t think it would work. That Hoover was just using this as a jobs program to get America back on its feet and people working again.  Yet, here we are, 95 years later, still amazed at its brilliance.

Over the next 5 years, while the Great Depression played out, thousands of desperate unemployed men and their families would make their move to Las Vegas, hoping to get hired on for the project.

An average payroll of 3,000 workers with peak employment of 5,251 workers in 1934.  96 men officially lost their lives building the dam while the actual death toll is rumored to be around 4-500 workers. 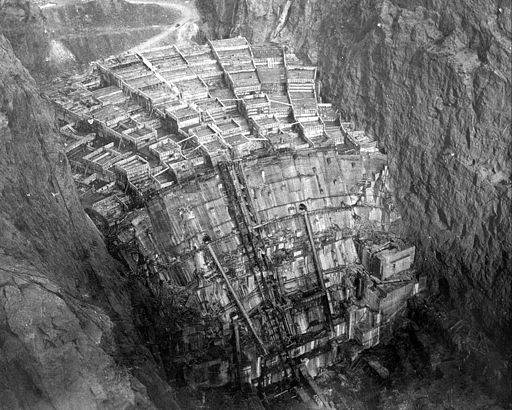 What’s in a Name

As the project started to become real, the name started to take on a new meaning, especially when it was decided to move the project closer to the village of Las Vegas in a place called Black Canyon. Black Canyon was better suited for creating the needed reservoir behind the dam (Lake Mead). As well as being closer to a labor pool (Las Vegas).

Hubert Hoover had his handprints all over this project. First, as an engineer, helping to pinpoint the best geological location. Then later as the Secretary of the Interior who helped negotiate the water rights treaty between the seven states where the Colorado River flowed.  To being President when it became a reality. Hoover had called it “the greatest engineering work of its character ever attempted by the hand of man.”

Hoover was a republican, so the democrats in Washington used the name “Boulder Dam” and the Republicans used the name “Hoover Dam” – For every legal document you find that says its name was Boulder Dam, you can find a legal document claiming its name was always Hoover Dam. Then you have the one you see most often in the construction documents; “The Dam In Boulder Canyon”.

On September 30, 1935, newly elected President Franklin D. Roosevelt (D) dedicated the completed dam using the name “Boulder Dam”.  In 1947, Congress passed legislation officially designating the name of the dam in honor of the president who had a lot to do with its creation. Hoover Dam.

Purpose of the Dam

The dam would tame the flood-prone Colorado River protecting cities and farms while generating cheap electricity to supply power to homes and industry, and providing work for thousands who desperately needed jobs. This helped settle the west and prove to the world that America can do anything it sets its mind to do. This made it possible for people to feel safe and confident about moving westward. That you would find a steady flow of water and a steady flow of electricity.

Don’t you love all those safety harnesses they used back in the day??

Hoover Dam by the Numbers

Mark Anthony is The Vegas Tourist! Popular Tourism Ambassador, a frequent contributor to Las Vegas forums as well as travel media and bloggers. Loves to help people discover new things to see, do and experience while visiting Las Vegas and Beyond!
View all posts by Mark Anthony →